Did you know that MinaLima sells more than just your favorite Wizarding World designs? It’s true!

Now is a great time to check out the MinaLima Illustrated Classics collection. Eight books have now received the MinaLima treatment, getting beautiful covers and illustrations in the signature style of graphic design duo Miraphora Mina and Eduardo Lima. (They’ve even expanded their whimsical illustrations to wallpaper!)

Even better? The books have interactive and pop-up elements inside, so you’ll be immersed in the story of your choice. Take a look at this example from The Little Mermaid and Other Fairy Tales. 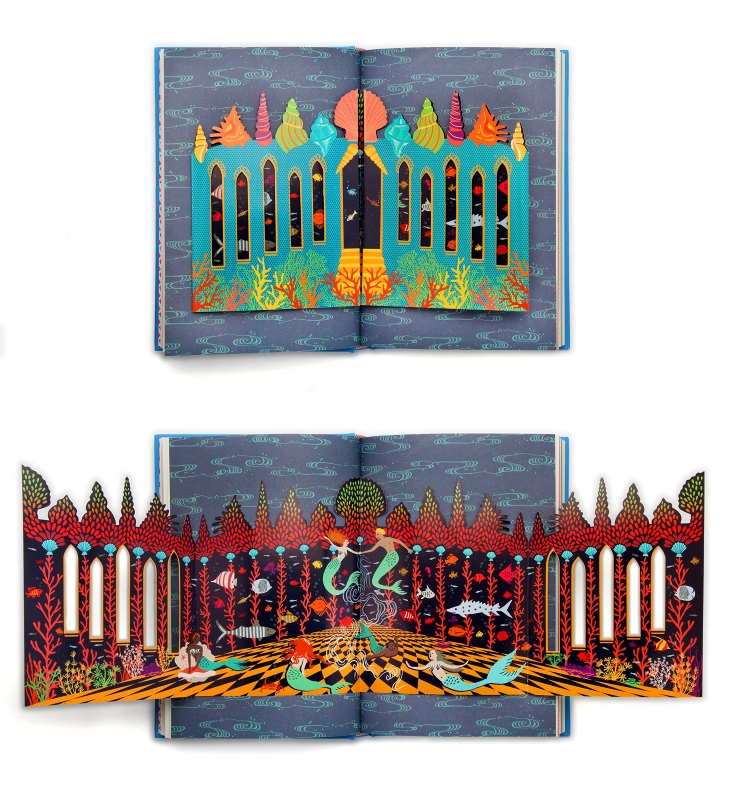 The Adventures of Pinocchio

First up is The Adventures of Pinocchio and its beautiful maroon and orange cover. 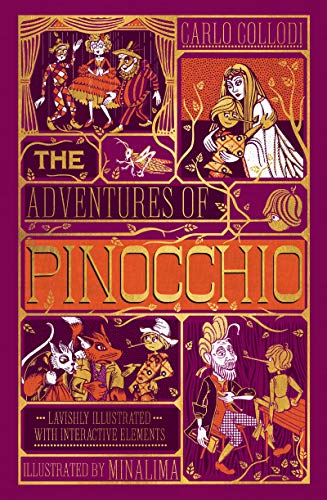 Originally published in 1883, The Adventures of Pinocchio is one of the best known and beloved children’s classics. Written by Italian political satirist Carlo Collodi, it is the story of Geppetto, a poor puppeteer who uses an enchanted piece of wood to carve a marionette boy he calls Pinocchio.” (Amazon description)

The Beauty and the Beast

The Beauty and the Beast comes to life with a cover that uses rose and dark blue tones. 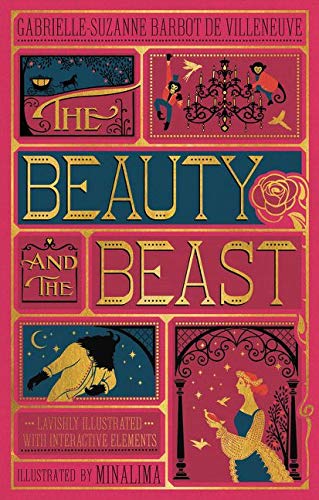 Generations of readers have been bewitched by the epic love story of a beautiful young girl imprisoned in the magical castle of a monstrous beast. Now, the classic fairy tale is brought to life in this spectacular illustrated edition as originally envisioned by Gabrielle-Suzanne Barbot de Villeneuve in 1740.” (Amazon description)

Peter Pan has a muted green and coral color scheme for its cover. 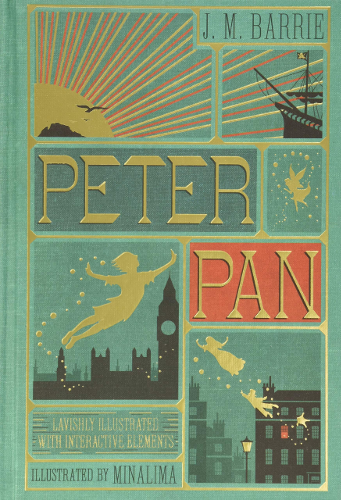 Let your imagination take flight as you journey with Peter Pan, Tinker Bell, and the Darling children to the magical island of Neverland in this beautiful new unabridged gift edition of J.M. Barrie’s classic story. All-new original illustrations and ten exclusive interactive elements from the award-winning design studio MinaLima create an enchanted adventure for readers of all ages—all you need is to think lovely thoughts and use a little bit of fairy dust.” (Amazon description)

The Wonderful Wizard of Oz

The Wonderful Wizard of Oz comes with a beautiful blue and green cover design. Note that it is currently available for preorder and will be released on September 7, 2021. 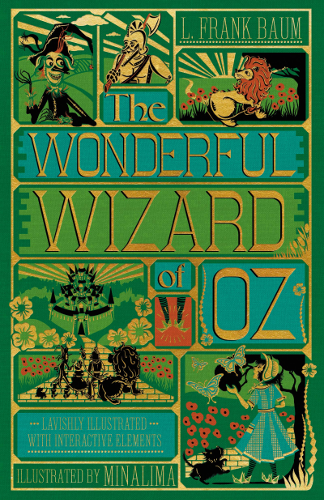 L. Frank Baum (1856-1919) published The Wonderful Wizard of Oz in 1900 and received enormous, immediate success. Baum went on to write seventeen additional novels in the Oz series. Today, he is considered the father of the American fairy tale. His stories inspired the 1939 classic film The Wizard of Oz, one of the most widely viewed movies of all time.” (Amazon description)

The cover of The Secret Garden is a mixture of red, yellow, and green. 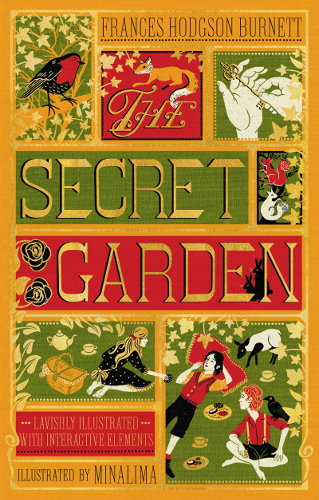 Join Mary Lennox on a captivating journey through hardship, friendship, happiness, and the restoration of a beautiful garden. Frances Hodgson Burnett’s The Secret Garden gets reimagined like never before in this stunning new unabridged edition. Originally published in 1911, the beloved fairy tale remains a popular children’s novel. Filled with exciting all-new illustrations and exclusive interactive elements from the award-winning design studio MinaLima, this is a must-have collectible that can be enjoyed by readers for generations.” (Amazon description)

The Little Mermaid and Other Fairy Tales

The cover of The Little Mermaid and Other Fairy Tales has a blue color scheme with rust-colored accents. 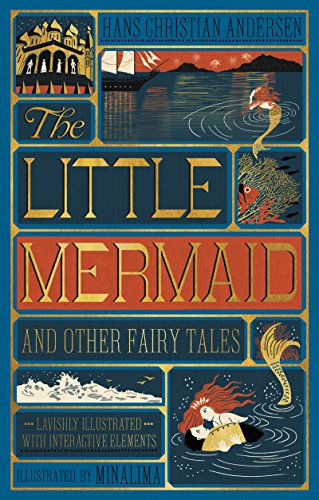 Generations of readers have been enchanted by the whimsical fairy tales of Hans Christian Andersen. His stories come to life in this unabridged collection of twelve beloved stories, including The Little Mermaid, The Ugly Duckling, The Princess and the Pea, and Thumbelina. All-new and original illustrations and exclusive interactive elements from the award-winning design studio MinaLima create an enchanted literary adventure for readers of all ages and make this anthology a must-have collectible.” (Amazon description)

The cover of The Jungle Book has an olive green and orange color scheme. 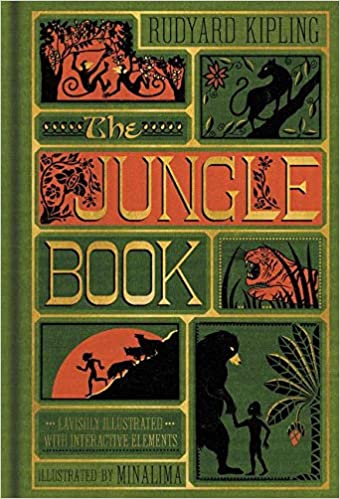 Since its publication in 1894, Rudyard Kipling’s beloved masterpiece The Jungle Book has been celebrated by generations of readers. Composed of seven tales, each one accompanied by a poem, The Jungle Book is a coming of age fantasy that introduces a lush, colorful world full of adventure and danger. The first three tales include some of the most charming and unforgettable characters in literature—the man-cub Mowgli, the black panther Bagheera, the wise brown bear Baloo, the ruthless tiger Shere Khan, and the hypnotic python Kaa. The other four tales each tell the story of a different animal, such as the travels of the white seal Kotick; the battle between the courageous mongoose Rikki-Tikki-Tavi and the deadly cobra Nag; Toomai and the elephant dance; and the camp animals of the queen’s guard.” (Amazon description)

Alice’s Adventures in Wonderland & Through the Looking-Glass

The cover of Alice’s Adventures in Wonderland & Through the Looking-Glass uses teal tones and a dark pink for some added pop. 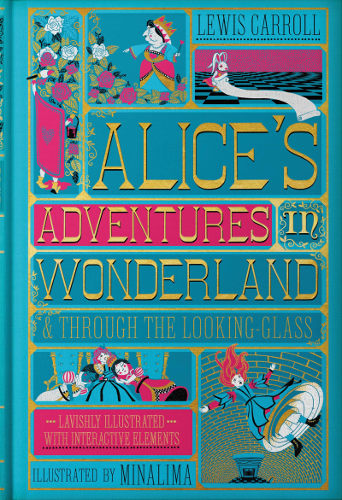 Originally published in 1865, Lewis Carroll’s exquisite Alice’s Adventures in Wonderland & Through the Looking-Glass have remained revered classics for generations. The story of Alice, an inquisitive heroine who falls through a rabbit hole and into a whimsical world, has captured the hearts of readers of all ages. Perhaps the most popular female character in English literature, Alice is accompanied on her journey of trials and tribulations by the frantic White Rabbit, the demented and terrifying Queen of Hearts, the intriguing Mad Hatter, and many other eccentric characters.” (Amazon description)

Are you planning to curl up with any of these classic stories soon? Tell us which one is your favorite in the comments below!