Who Was the Better Draco Malfoy? Lauren Lopez or Tom Felton?

Over the years, Draco Malfoy has been portrayed in many ways. We have seen him through books, movies, plays, musicals, and various skits, but the two portrayals that remain stuck in my head are Tom Felton’s movie version and Lauren Lopez’s A Very Potter Musical version. The general father issues and snobbishness remain the same, but you could say that a big difference between these two is the amount of floor work involved. These two actors left a lasting impression on me with their styles of Draco. Tom Felton brought the more brooding version, while Lauren definitely added some humor to the role. So who did it better?

First, let’s take a look at Lauren Lopez’s version of Draco Malfoy. If you are a Harry Potter fan in any way and have not seen the StarKid musicals, then you are missing a truly unique Draco experience. As stated earlier, this role stands out with the sheer amount of floor work involved. From rolling to sliding to tumbling, Lauren Lopez sure puts in the cardio with this role. There are also various dance moves performed to add some extra zest. The character’s personality also differs by being a little bit less brooding and adding more bratty, childlike behavior. Lauren portrays Draco in a way that makes him more entitled and desperate for love. This version of the role involves more humor since it is a musical take on the story. Lauren’s Draco quickly becomes a lighter portrayal and therefore takes the dark themes out of the role. 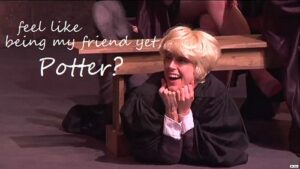 Obviously, we have all seen Tom Felton’s version of Draco Malfoy. His style brings the more serious side of the character out. While Tom can certainly play on the dramatics as well, his portrayal stands out as a little more arrogant. This side of the character does share in the desperation for love and acceptance by his father, but he doesn’t share the same love of whimsical dance. When we first think of Draco, we probably automatically see Tom Felton and his attitude. Tom’s portrayal deals more with the dark side, such as his hatred for Mudbloods. With this role, Draco is also a lot more involved in the action of the story when he is recruited by Voldemort and is forced to commit acts he clearly doesn’t want to be a part of. This plays on a more serious note as we see him go through some deep stuff. Tom plays Draco Malfoy with a much deeper sense of regret and abandonment. This portrayal has a much darker feel than Lauren’s version. 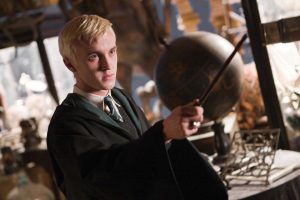 In comparing the two portrayals, we can look at a few examples. In A Very Potter Musical, anytime Lauren enters the stage, she enters in the most dramatic way possible. For example, she enters a scene to confront Harry, Ron, and Hermione by being carried in by Goyle. She also enters a scene by tumbling in to confront Ron at the dance. Tom does not portray dramatic entries. He instead enters by simply insulting Harry, such as in Harry Potter and the Order of the Phoenix where his first line is an insult to Harry straight off the Hogwarts Express. Another example can be how Lauren’s portrayal of Draco outright flirts with Hermione several times, while Tom’s version only shows his discontent. We can look at A Very Potter Musical as Lauren sings a duet about Draco’s love for Hermione. This contradicts Tom who gets punched in Harry Potter and the Prisoner of Azkaban after insulting her.

In determining who was superior in their style of Draco Malfoy, we must reflect on the points we have made. Lauren Lopez brings more light-hearted fun to the role by creating a dramatic, humorous, clumsy, and whimsical Draco Malfoy. Tom Felton, however, plays a more serious, damaged, and critical Draco Malfoy. Choosing who did it best might just depend on what you are looking for. If you are looking for a version that will make you smile and laugh, then Lauren Lopez is definitely one step ahead. If you are looking for the more serious version, then Tom Felton definitely did it better. Personally, I prefer Lauren’s version because it is very hard for me to now watch the movies and not see Lauren rolling on the floor, leaping through the air, and over pronouncing the words. Both of these actors play Draco so uniquely and bring their own spin to the role. I don’t believe that anyone could have played these versions any stronger. So who do you think did it better?