With only a few months to go until Harry Potter and the Cursed Child Melbourne debuts as a one-part play at the Princess Theatre, the cast for the reimagined production has been announced.

Continuing in the roles of Harry, Ron, and Hermione are Gareth Reeves, Paula Arundell, and Michael Whalley. Lucy Goleby will return as Ginny Potter, and the new generation of young Hogwarts students remains unchanged, with Ben Walter and Nyx Calder continuing in their roles of Albus Potter and Scorpius Malfoy, respectively. Similarly, Aisha Aidara will be continuing in her role as Rose Granger-Weasley but will also play the role of Young Hermione as part of changes to the play. 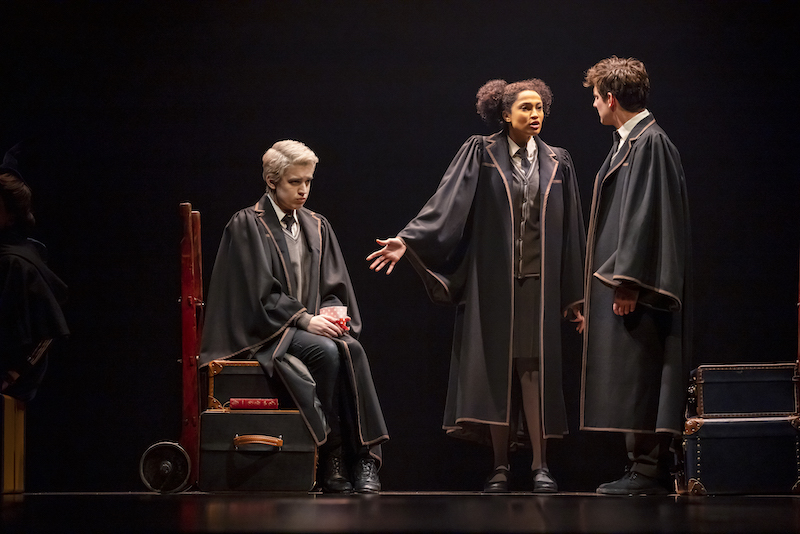 Nyx Calder, Aisha Aidara, and Ben Walter will be returning in their roles.

But it’s not all familiar faces. Taking on the role of Draco Malfoy in Melbourne will be Lachlan Woods, who is joining the cast from the Sydney production of North by Northwest. There will also be new additions to the wider cast, with Guy Langford, Jeremiah Wray, Andy Conaghan, Shannon Foley, Effie Nkrumah, Tamara Bailey, and Mark Doggett joining the production as swings and ensemble members.

And that’s not all. Joining the 36-member company are aerialist performers Bailey Nathan-Park, Britney Unmack, Daniel Price, and Brooke MacRae. We can’t wait to see what this new one-part production has in store!

A post shared by Harry Potter on Stage AUS (@cursedchildaus)

The reimagined production of Cursed Child will premiere in Melbourne in May. Tickets will go on sale on Friday, February 25, for shows through October 2, 2022. The two-part play will continue to run until March 27, which means fans have just over four weeks left to experience the magic of the original performance. Tickets for the remaining performances can be purchased on the Cursed Child website.

The reimagined, one-part production of Harry Potter and the Cursed Child is delighted to confirm its brilliant cast for its Australian debut in May 2022.

Melbourne audiences will be introduced to both familiar and new faces in the reimagined production. Including many of the original cast, returning performers are Gareth Reeves as Harry Potter, Paula Arundell as Hermione Granger, Michael Whalley as Ron Weasley, Lucy Goleby as Ginny Potter, Ben Walter as Albus Potter, Nyx Calder as Scorpius Malfoy, Aisha Aidara as Rose Granger-Weasley/Young Hermione and Jessica Vickers as Delphi Diggory.

Australian audiences have now only 4 weeks left to witness the original story before the production closes on 27 March, with all final tickets now available.

New tickets for the reimaged production will go on sale to the public [on] February 25, ahead of its reopening in May, taking performances up to 2 October.

Originally an epic two-part event that cast a spell over the world, Harry Potter and the Cursed Child has now been boldly reimagined as one singular performance by original creatives J.K. Rowling, Jack Thorne and John Tiffany. The new Broadway production of Harry Potter and the Cursed Child is a thrilling and immersive one-part theatrical event, where magic is reimagined.

Harry Potter and the Cursed Child is supported by the Victorian Government’s annual Major Events Fund, through Visit Victoria.