Hedwig the Animatronic Owl Has Been Freed from Her Cage

Hedwig the animatronic owl, who lives on Platform 9 3/4 at the Wizarding World of Harry Potter – Diagon Alley at Universal Studios Florida, has been liberated from her cage, where she now sits free on top of a trunk. 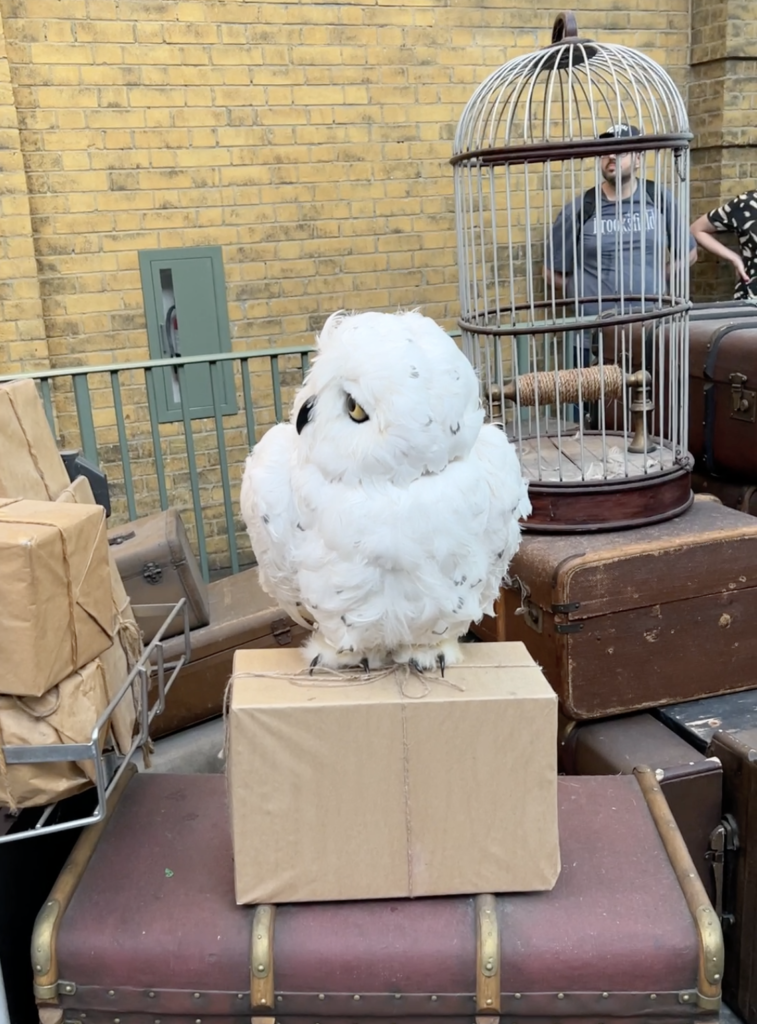 Tylor Starr, president and cofounder of the Protego Foundation (a Potter-focused animal rights charity), talked about the significance of this action, which was a joint decision made by Universal Creative, the Blair Partnership, and Warner Bros.

While this animatronic isn’t harmed by living her life in a cage, real owls are hurt when they are kept in a cage and denied everything natural and important to them like hunting, flying, choosing a mate, and more.

Guests young and old visiting the magical Wizarding World of Harry Potter won’t see a bird forced to live their life in a depressing cage, but will instead see an animatronic example of a bird now able to spread her wings and live her life outside of cage bars.

This is another positive step forward for the rights of owls at the Wizarding World; last year, Warner Bros. confirmed that live owls would no longer be used in shows at its theme parks. It was also announced that owls would be excluded from “all licensed live Harry Potter productions.”

Owls and their rights in the wizarding world are a controversial topic that has led to conversations, campaigns, and even lawsuits within our Muggle world. Last year, Evanna Lynch joined a PETA lawsuit against owl experimentation, and in 2020, a bird sanctuary in Scotland put out a plea to not keep owls as pets after rescuing four owls whose previous owners had left them in very poor conditions.

You can find more information on how to protect the livelihoods of owls on the Protego Foundation’s owl resource page. This page includes the entire history of the Harry Potter fandom, compiling and documenting “every instance of owl-use, what happened in each situation, and what still can be done.”

On there, you’ll also find a “Report Owls” feature that you can fill in to help free owls from live events.

If you are at a magically-inspired [sic] event and see owls being used, this anonymous form will allow you to report the live owls, and [t]he Protego Foundation will do the rest!

We are so thrilled to hear about Hedwig’s liberation at Universal Orlando. The Protego Foundation is celebrating the magical news by having a sale on its “Owls Don’t Belong in Cages” shirt and its Animal Activism enamel pin set, which features four pins with “animal rights messaging, including 3 previously revealed designs and a mystery design.”

Wizarding-inspired animal rights organization celebrates the liberation of the animatronic and the message it sends to theme park guests.

ORLANDO, FL – After being trapped in her cage since the opening of King’s Cross [s]tation and Platform 9 ¾ at Universal Studios Florida in 2014, Hedwig, the owl animatronic, has been freed from her cage, reports [t]he Protego Foundation, a wizarding-inspired animal rights charity.

Formerly locked within a wire cage atop a train trolley and trunk emblazoned with the letters "HP," the Hedwig animatronic, held in captivity, greeted guests waiting to board the Hogwarts Express from Platform 9 ¾ to Hogsmeade [s]tation at Universal’s Islands of Adventure. Now the animatronic owl stands proudly outside the cage, eager to say hello with a spin of her head.

“While this animatronic isn’t harmed by living her life in a cage, real owls are hurt when they are kept in a cage and denied everything natural and important to them like hunting, flying, choosing a mate, and more,” says Tylor Starr, president of [t]he Protego Foundation.

The Harry Potter fandom has had a sordid history with live owls since the release of the first Harry Potter film. Bird sanctuaries have documented an overwhelming increase in owl surrenders from Potter fans who bought the birds, not realizing their complex needs.

“Guests young and old visiting the magical Wizarding World of Harry Potter won’t see a bird forced to live their life in a depressing cage,” says Starr, “but will instead see an animatronic example of a bird now able to spread her wings and live her life outside of cage bars.”

Harry Potter author J.K. Rowling has also publicly urged fans of her magical series to not buy owls and keep them in cages as “pets.”

“The Protego Foundation is so appreciative to Universal Creative, [t]he Blair Partnership, and Warner Bros. for making this kind and compassionate change,” says Starr, “and we are eager to see other caged magical creature animatronics get their liberation, as well.”

To celebrate this major milestone, [t]he Protego Foundation is having a sale on their popular “Owls Don’t Belong in Cages” tee and enamel pin set, with all proceeds from the sale of these merch items going to campaigns helping owls and other animals.

For more information on the Harry Potter fandom’s use of owls, check out [t]he Protego Foundation’s growing database of reports.