Small Sad “Potter” Moments That I Can’t Stop Thinking About

From the Muggle campsite director in the fourth book to the Cattermoles that got mixed up in the trio’s break-in of the Ministry of Magic in the last book, there are a lot of small moments throughout the series that break my heart.

The Best Moments of the Quidditch World Cup

“Harry Potter and the Goblet of Fire” has some amazing moments, including the Quidditch World Cup. Let’s talk about some of the best parts of this event. 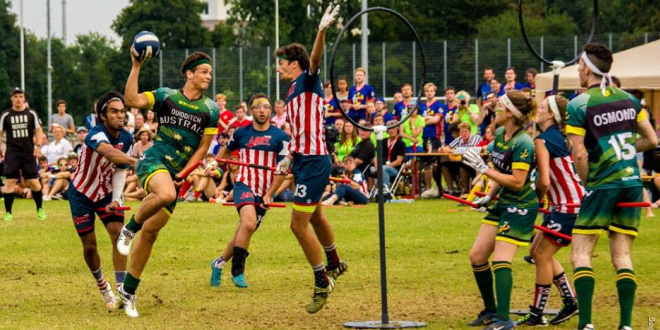 MuggleNet Chats with Team USA Ahead of the Muggle Quidditch World Cup!

With the World Cup kicking off in Florence, Italy, Team USA chatted with MuggleNet about their plans to reclaim the gold and what it takes to play at an elite international level.

The Seven Best Moments of the “Quidditch Through the Ages” Audiobook

We count down the most memorable moments of the new “Quidditch Through the Ages” audiobook. Explore narrated content, sound effects, and anecdotes about the wizarding world’s most dynamic sport!

Florence, Italy, has been chosen as the location for next year’s World Cup! Is your country competing?

Why You Should Join a Quidditch Team

If you are looking for a game with some of the most interesting gameplay, the best teammates around, and an amazing community, then Quidditch is just the sport for you!

Since 2009, the Accio Books campaign by the Harry Potter Alliance (HPA) has donated nearly 300,000 books to communities in need with its annual book drive. This year, the HPA is bringing its book drive to US Quidditch Cup 9.

A new documentary following TeamUK’s journey to the Quidditch World Cup – a journey that began earlier this year and will conclude with the tournament this summer in Frankfurt on July 23-24.