2020 might have been tough so far, but it surely isn’t putting a damper on wizarding world magic. From masks inspired by the Hogwarts Houses to the release of various new Funko Pop! figures throughout the year, we’ve been treated to plenty of magic amid these dark times. Another silver lining is that New York Comic Con is taking place virtually from October 5 to October 10, and we have a feeling it’s going to leave us with plenty more magic to carry us through the rest of the year.

This year has seen the release of several new Harry Potter Pop! figures – from the trio’s ethereal Patronus figures to the recent Holiday-themed Potter Pop! figurines, it has indeed been a magical year for Pop! heads everywhere. Now it’s time to fish out those Galleons again, because Funko Virtual Con 4.0 has some more magic up its sleeve.

Various exclusive Funko Pop! figures will be released at this convention, including characters from a wide variety of shows and films. As expected, some new exclusive Harry Potter Pop! figures will be among the new releases, and this time around, it’s all about the Weasleys. First up is Ron Weasley in his Quidditch World Cup gear as seen in Harry Potter and the Goblet of Fire. He is donning a red and black hat and face paint in support of the Bulgarian team and carrying a pair of Omnioculars. He even has a “K” painted on his face in support of the Bulgarian Seeker, Victor Krum. This was, of course, before Krum took an interest in Hermione, after which Ron quickly turned from fan to foe. 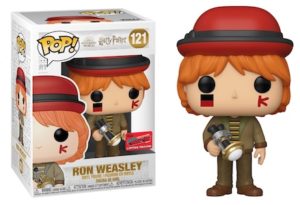 The second Pop! fans can look forward to is a Funko Pop! Town in the form of the Burrow, complete with Mrs. (Molly) Weasley. The Burrow Pop! perfectly resembles the movie version with its crooked top stories that seem to be held in place by magic. These Pop! figures are definitely a must-have for collectors and will be a nice addition to last year’s Emerald City Comic Con exclusives, which included Ginny, Fred, and George Weasley in their green Quidditch World Cup gear. 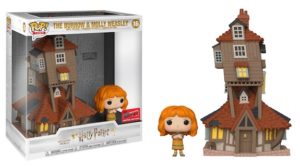 These Funko Pops will be available for purchase through Funko Shop, and fans who buy from there will have a 50/50 chance of getting an NYCC 2020 sticker included with their Pop! figure. These exclusive Pops will also be available at the usual retailers like Target, GameStop, Hot Topic, Entertainment Earth, and more. The new Pop! figures are set to go on sale Thursday, October 8. For more information on the event, you can check out Funko’s website.

Are you excited about the new Harry Potter Funko Pop! figures? Which one will you buy first? Let us know in the comments.