Last week, I reviewed Rita Mock-Pike’s new book, The Unofficial Hogwarts for the Holidays Cookbook. The review mostly discussed the book’s layout and design, but of course, the recipes are the most important part of any cookbook. So this week I’m going to give my thoughts on the first four recipes that I made from it.

I was so excited to get this book that I didn’t waste any time getting into my kitchen. Since I am a baker, I wanted to make some baked goods. But I needed to do something quick that I could compare to other recipes I’ve made before. I split the difference by making Cockroach Clusters as my first-ever recipe out of this book (I always make note of the first recipe I made from any new cookbook). The Hot Chocolate was an easy second choice since it’s my all-time favorite drink, and I’ve even experimented with my own dry mix in the past. Third, I thought the Fiery Whiskey would be a fun thing to do, having also been a bartender for the past two years. Finally, the Gravy recipe intrigued me, because I’ve always made gravy from turkey or beef drippings, not stock. I was curious about what the flavor would be like without any kind of browning, which you usually get when cooking meats. So it became my fourth choice. I grant you, it’s a very odd combination of recipes, but it fits my personality: sporadic and motivated by curiosity. These recipes, and many others, can be found on MuggleNet’s Rosmerta’s Recipes section.

“Cockroach Clusters” is perhaps one of the worst-sounding names for a food in the entire wizarding world. However, these little treats are quite good and very easy to make. The process is simple: Melt chocolate and butter, add milk, and fold in additions. Rita’s method here is great. It allows for a one-pot cooking style and compensates for the excess heat from melting the chocolate by adding milk to cool it down before adding the marshmallows, which would melt otherwise. My one suggestion for other cooks is to use a disher to scoop these confections. I used a #40 (that’s a purple handle for commercial-grade equipment), which is a bit larger than what Rita calls for, but next time I would probably use a #50 or #60 instead, which are about the size she suggests.

Most recipes for cockroach clusters online are made with peanuts because of Ron’s comment about passing them off as peanuts to Fred. I like that Rita went in a different direction and used coconut, pecan, and marshmallow in her version. Peanut and chocolate are a good combination, but these are far more interesting both in terms of flavors and texture. Plus, they are very simple to adjust if you prefer one flavor over the other. Personally, I didn’t feel like there was enough coconut or pecan in the clusters, so next time I make them I’ll add more, in addition to scooping smaller portions.

All in all, this is a fun, simple recipe that is also quite tasty. These would be great for late-night winter cravings or for sending to friends and family as holiday treats! 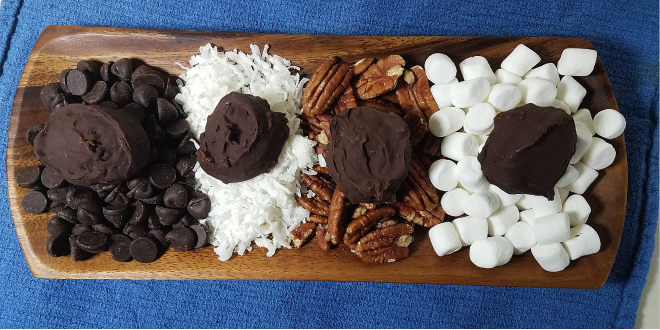 My guess is that most Americans make hot chocolate with microwaved water and a dry mix packet. I wonder if they know how simple it is to make it from scratch. I’m guilty of using the easy route too, but this recipe is so simple that I don’t mind the extra two minutes it’ll take me to cook this instead of just using my kettle.

The cooking method is basically combining everything and heating it, except the milk is held back from the initial cooking to prevent the cocoa powder from clumping. However, when I tried adding the water to the dry ingredients, it was too dry. There was no way it was going to boil without something burning. So instead, I’d recommend whisking the dries together. This will disperse the cocoa throughout the mixture and help keep things separate when added to the liquids. Then everything but the extract can be added to the pot and boiled, then brought to serving temperature. Remember that the extract is added at the end because cooking it will reduce its effectiveness.

I’ve made this recipe three times now since I got the cookbook. The first time, I split the drink into two mugs and flavored each with a different extract. The addition of the vanilla extract is perfect. It adds depth of flavor and may bring out some characteristics of the cocoa, depending on the quality of cocoa you use. However, the peppermint was too strong for me. So the next time I made it, I cut the peppermint in half, which was much better. It was there, but not nearly as overbearing as my first try.

Overall, this is a really good hot chocolate recipe. It has good flavor and clean texture (not grainy or greasy). Plus, it’s made from scratch, so you know there’s no preservatives or anything else in it that you don’t really want to be eating. 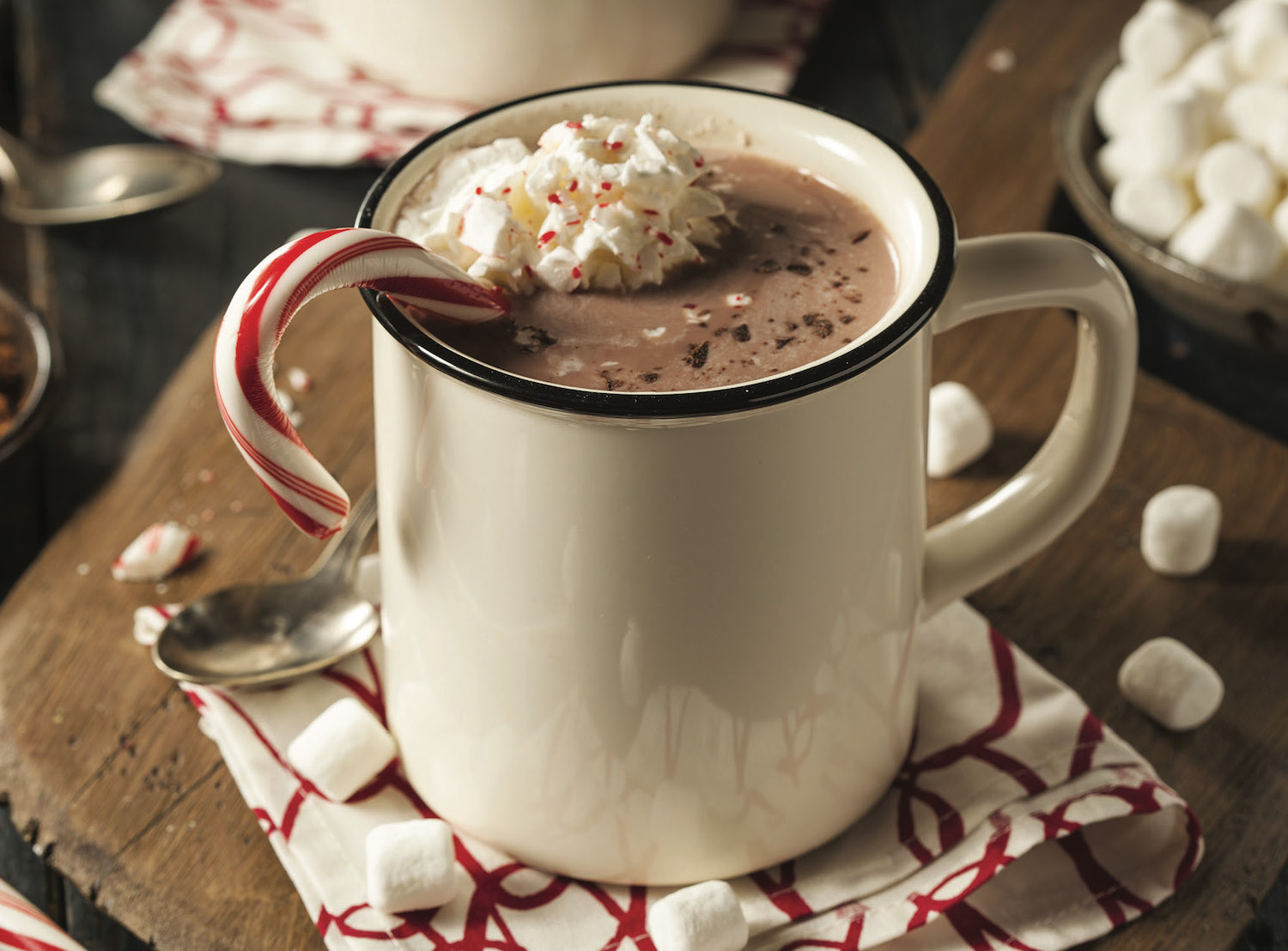 The production of this alcoholic drink is quite simple. However, it’s not the fastest recipe here, since it is an infused drink. Infused liquors are aged with the addition of a flavoring ingredient such as candies, herbs, or spices. In this case, we’re infusing whiskey with cinnamon and brown sugar. This can be done in as little as five days, or you can extend the infusion and let it sit for over a week. I’d suggest infusing the liquor in a glass jar. Plastic works, but those flavors may seep into the plastic and render the container unusable for anything else afterward.

I’m not a big fan of alcoholic drinks. I prefer making them for others over actually drinking them myself. But I still need to know what things should taste like to satisfy my guests. This drink would definitely qualify for anyone who likes their Bloody Marys spicy. The brown sugar adds some sweetness and complexity of flavor to the drink, while the Tabasco brings the heat, and the cinnamon rounds it all out, bringing sweet and heat together.

My one criticism of this recipe is that it’s almost impossible to make properly at the written measurements. One shot of whiskey will not effectively submerge two cinnamon sticks no matter what container they are combined in. So when I made this, I increased the recipe by four times but only doubled the cinnamon. Like the previous recipes, this one is also easy to modify by either adjusting the infusion time or the amount of Tabasco added to the whiskey. So feel free to play around with this recipe, but only if you’re an of-age witch or wizard! 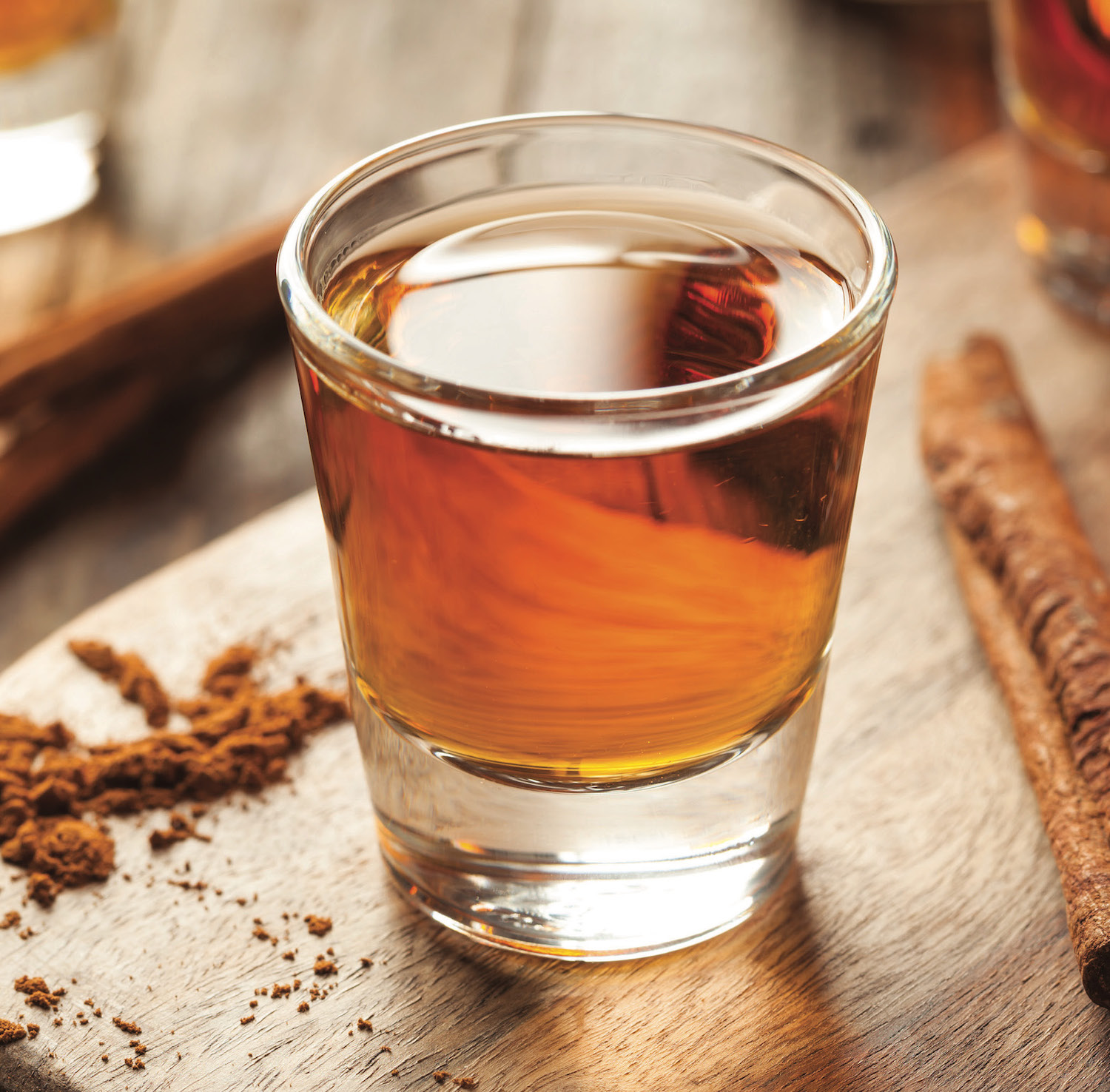 The method of this recipe is incredibly uncomplicated. Melting the butter and whisking in flour is known as making a roux. It is a common way to thicken soups and sauces in the kitchen. The only trick to this recipe is to make sure the roux is completely broken up and dissolved once the stock is added to the pot. Be sure that all lumps of roux are gone before adding the second half of the flour into your pot. Lumps will be avoided by whisking the gravy continuously, per the directions. If there is a break in the movement everything will settle and cause issues. (If lumps do form, a blender of some kind – I like my immersion blender – can be used to remove them. Just be careful that air is not added to the gravy.)

This gravy is very simple. It is a good base, but it needs more flavor – at least salt and pepper. However, as the intro to the recipe says, “this is a potion that benefits from experimentation.” Adding spices, herbs, and other flavors will create a more flavorful, complex gravy to pair with meats, potatoes, and loads of other dishes. Vegetable stock gravy would benefit from some fresh herbs and light spices such as whole peppercorns. Beef stock gravy might benefit from bolder flavors such as chili powder or cloves. The possible flavor combinations are numerous with this recipe, and I look forward to testing many of them in the future.

This recipe could also benefit from some adjustments to the consistency. It is very thick when it’s cooked and even thicker (almost like gelatin) when it’s refrigerated. My suggestion for adjusting it is to add more stock after it’s cooked and reheat as needed. This will give you exactly the texture you want without any guesswork. 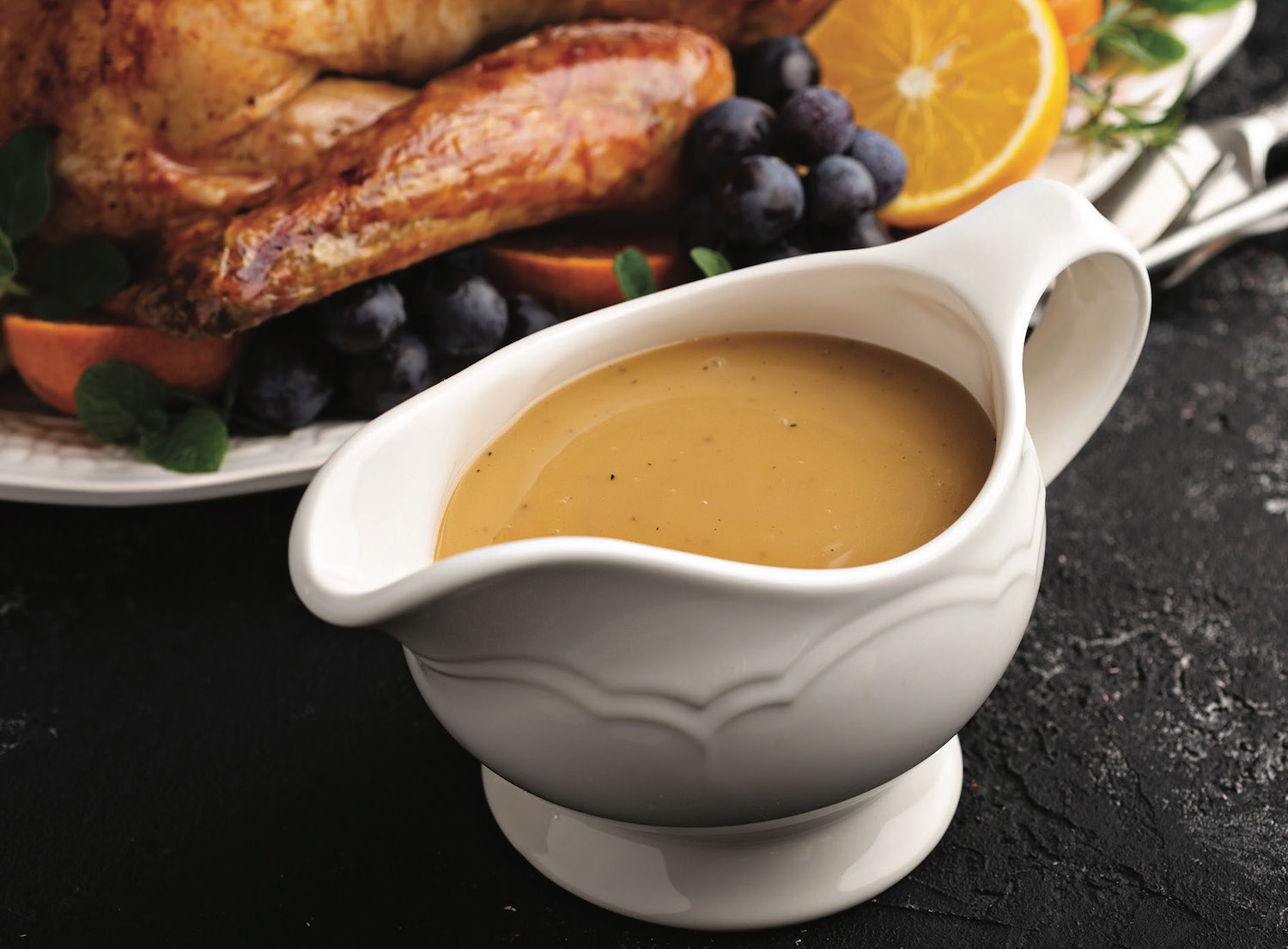 I hope you get to make these recipes this holiday season and that you enjoy them as much as I have. If you haven’t picked up your copy of The Unofficial Hogwarts for the Holidays Cookbook, I’d suggest you do. Even better, enter our contest to win a copy! There are many great recipes inside that celebrate all sorts of Hogwarts holidays.