There’s always a little bit of extra magic in the air this time of year, mostly because fall is the time when Hogwarts students return to school, and we love to commemorate that special day every year on September 1. This year, however, is extra special, because the Harry Potter and the Sorcerer’s Stone film is celebrating its 20th anniversary on November 16. This calls for some serious celebration, and so far, there are plenty of events dedicated to doing just that.

Dress in your best Hogwarts robes and get ready for one of the most magical experiences you’ll probably have this year: A magical installation of Wizarding World wands is now working its magic in Leicester Square, London. For those who remember, the first Potter film had its premiere in Leicester Square in 2001. Little did we know that we’d still be celebrating the magic two decades later.

This installation will take your breath away – it features nine wands from our favorite characters from Harry Potter and Fantastic Beasts and is 15 feet (4.5 meters) tall, forming a 60-foot (18 meters) walkway. The wands are exact, giant replicas of the wands in the films. 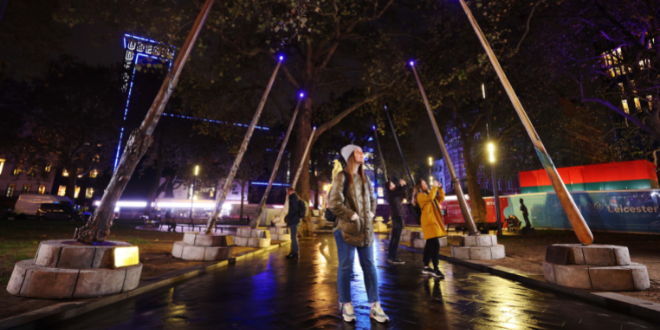 Paul Harris, who choreographed the wand scenes in Harry Potter, attended the unveiling event and offered a wand training class for local children (child or not, we would have joined if we were there in person). If you are jumping up and down with excitement right now in true childlike fashion, you’ll be happy to know that the installation is officially open to the public until October 25. If you’d like to have the full magical experience, go visit the square between 6:00 and 8:35 p.m. During that time, the wands will be illuminated and perform a light show every half hour, accompanied by the music from the Potter and Fantastic Beasts films. Note that the square will be closed for a private event on October 18.

Polly Cochrane, Country Manager, UK & IE at Warner Bros., says that they are thrilled to be able to celebrate this special Harry Potter occasion.

It is so exciting to have the Wizarding World [w]ands brought back to London, and we are thrilled to celebrate the 20th anniversary of ‘Harry Potter and the Philosopher’s Stone’ being released in UK cinemas. It is an honour to have the [w]ands displayed in Leicester Square, considering its legacy of hosting premieres for the ‘Harry Potter’ and ‘Fantastic Beasts’ films over two decades, and we hope the fans will love and enjoy the light shows as much as we do.

The best part is that the wands will be around for quite a while. The installation is going on tour in four cities in the United Kingdom until the release of Fantastic Beasts: The Secrets of Dumbledore. These cities include Hull, Stoke, Reading, and Birmingham. The wands will be displayed for a week in each of these cities starting in March next year.

As for other 20th-anniversary celebrations, fans can look forward to special screenings of the film that will take place across the UK and Ireland starting on October 29. The platform nine and three-quarters trolley will also go on a little tour, delighting fans at train stations in Edinburgh, Birmingham, Cardiff, and Belfast.

This year is truly going to end on a magical note, and we sure think we all deserve it after the dark times we recently lived through. Are you going to go have a look at the wand installation? Tell us in the comments.

LONDON, UK: 13th October 2021 – A breathtaking installation of nine giant wands has been unveiled in Leicester Square in London, where Harry Potter and the Philosopher's Stone had its premiere back in 2001, as excitement builds for the 20th anniversary of the film’s release.

Standing fifteen feet tall and forming an 18[-]metre walkway, the wands are exact replicas of those belonging to nine of the most beloved characters in the Harry Potter and Fantastic Beasts films and join Harry Potter and eight other bronze statues in the award-winning ["]Scenes in the Square["] installation.

The installation was revealed with a dynamic wand training class led by Paul Harris, the wand choreographer from the Harry Potter films and creator of the wand ‘language’, for local children from Park View School.

All nine wands will be illuminated from 6 [to] 8.35 pm every evening from today until 25th October and will perform light shows every half an hour from 6 pm during this time, to music from the Harry Potter and Fantastic Beasts on scheduled days.*

The wands form part of Inside Out Festival – a brand[-]new, free festival produced by Westminster City Council and partners that brings art, entertainment, and culture outdoors to the streets of Westminster and will run until the end of October.

Polly Cochrane, Country Manager UK & Ireland at Warner Bros., says, “It is so exciting to have the Wizarding World [w]ands brought back to London, and we are thrilled to celebrate the 20th anniversary of Harry Potter and the Philosopher’s Stone being released in UK cinemas.

“It is an honour to have the [w]ands displayed in Leicester Square, considering its legacy of hosting premieres for the Harry Potter and Fantastic Beasts films over two decades, and we hope the fans will love and enjoy the light shows as much as we do.”

Ajwa Gul, 11, from Park View School says, “It was really fun, and plus, we learnt new skills, and we learnt the moves [that] Harry Potter fought, and we all really enjoyed it["] - Ajwa, 11

Amelia Wraczewska, 11, from Park View School says, “My favourite thing was how we learnt the wand positioning and the movements. I really enjoyed how we got this experience, as this doesn’t happen everywhere!”

The official 20th [a]nniversary of Harry Potter and the Philosopher’s Stone will be marked on the 16th November 2021 and celebrated throughout the [a]utumn, with special screenings in cinemas across the UK and Ireland from 29th October. Other celebrations include a tour of the Platform 9 ¾ [t]rolley, which will be installed at train stations in Edinburgh, Birmingham, Cardiff and Belfast.

*Please note on 18th October Leicester Square is closed for a private event, and so the wand displays won’t take place.