It’s been a very rough year for many of us, but we’ve made it to December. Why not celebrate with a Yule Ball-inspired feast as a part of your holidays this year? Rita Mock-Pike’s The Unofficial Hogwarts for the Holidays Cookbook from Ulysses Press has many great recipes one could make for a night full of celebration in support of your favorite Triwizard champion. The book does include a section dedicated to this semi-annual event. But I chose to explore beyond those five recipes and instead picked things that I would actually make for a holiday feast.

This video demonstrates how to make all four of the recipes discussed here: Eggnog, Shrimp Cocktail, Goulash, and Christmas Pudding. I hope it proves helpful for your own cooking. 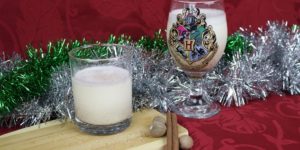 I absolutely love eggnog. I grew up in a farm town, and we would get our eggnog from a local dairy farmer. It was always the star of Thanksgiving and Christmas mornings. This recipe is different from what I remember getting from that farmer, but it is quite flavorful. It uses some of my favorite spices – cinnamon and nutmeg – but is a bit too sweet for me. A half shot of rum would fix that (for of-age wizards and witches only). The drink is a bit thinner than what I’m used to. Whisking the eggs more would fix this, as would letting it sit for a day or two before consuming.

As you can see in the video, I whisked the yolks and whites by hand. I don’t recommend that for most individuals, but I had no better option for the video. I suggest instead using a stand mixer or hand blender to whip the yolks and whites. Overall, this recipe is a lot of work for something that most people will buy in the store. But this method is a cheaper option than purchasing a half gallon. Plus, flavors can be modified as you make it. 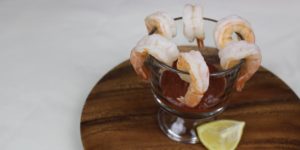 My family includes shrimp cocktail in our Polish Christmas Eve dinner every year. We keep it very simple: cooked shrimp and basic cocktail sauce. This version has a bit more to it than that, and I do like the addition of new flavors in this version.

First is the shrimp. I was expecting that poaching cooked shrimp for that long would render them rubbery and inedible. Happily, I was wrong. I didn’t get a lot of the lemon flavor, but it’s definitely there, along with a touch of sweetness. I might add more lemon juice to my poaching liquid next time, just to bring out that flavor more. Otherwise, the shrimps are quite good.

The cocktail sauce isn’t spicy enough for me. I like a simple sauce that brings tears to your eyes: a lot of horseradish with just enough ketchup to bring it together. Perhaps it’s just because that’s what I’m used to, but I feel like there are too many flavors in this version. I can see the addition of the lemon juice being helpful, so I think when I make this again, I’ll omit the pepper and garlic. I’ll probably add more horseradish, too.

There’s nothing complicated about actually making this recipe. Poaching is a much simpler process than I think most people believe it to be. All that needs to be done is to heat the liquid, add the shrimp off the heat, let it sit, then cool. The cocktail sauce is even easier. If you enjoy shrimp cocktail, definitely give this one a try! 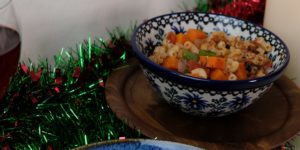 For a recipe that I expected not to turn out well, I am very impressed. When I was reading through and later preparing the recipe, I expected it to be dry. As I was cooking it, I didn’t think the carrots or pepper would cook enough in the short allowed time to really be edible. But again, I was wrong (clearly I’m much more of a baker than a cook). The carrots were tender, the pepper crisp but not raw, and everything felt like it really belonged there. I think out of the 12 recipes I’ve now made from Rita’s book, this is my favorite.

My only suggestion with this goulash recipe is to use a large enough cast-iron skillet to hold the turkey, carrot, and onion. The largest I own is a 10-inch. That is not big enough. It may not be evident in the video, but I had filled the pan completely and had to stir quite carefully not to make a mess. You’ll also notice in the video that I cooked the pasta ahead of time. This was both a videography choice and a professional recipe flow choice. It allowed me to only need one pot at a time instead of the two I’d need to cook pasta as the turkey browned. It wouldn’t be practical for an on-the-spot dinner selection, but if you’re cooking for a Yule Ball feast with guests over, less time spent in the kitchen is always better. 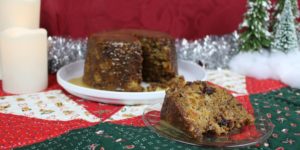 I always thought that British Christmas puddings were a complicated thing to make. Well, I was very wrong about that too. All this recipe requires is mixing the batter and steaming it for about four hours. The most complicated thing is making sure that your mold for the pudding is big enough to hold the dessert. Rita’s recipe does not give specific instructions for the mold size per recipe, which is unfortunate. I got lucky and picked the smallest container I could that did, in fact, fit the pudding. For one recipe from the book (and now in Rosmerta’s Recipes), I used a round 1.75 Liter Pyrex glass container. The dessert rose about 1cm over the top of the glass, but it held its shape perfectly.

I liken this dessert to an American fruitcake, which is something that I do not enjoy at all. They tend to be dry, flavorless, and rubbery. I shouldn’t be surprised that the European version is better. This pudding has a nice, light texture full of dried fruit, nuts, and all kinds of spices. The butterscotch sauce that goes with it is very easy to make and adds a great flavor to an already good Christmas treat.

Keep in mind that over the last three months I’ve only discussed a few of the recipes in The Unofficial Hogwarts for the Holidays Cookbook. There are another 63 recipes still waiting to be discovered. It’d make a great gift for a fellow Potterhead in your life (or for yourself; I don’t judge). Be sure to let us know what recipes you try on social media or in the comments below. Happy Holidays and happy cooking!